“See to it that no one takes you captive by philosophy and empty deceit, according to human tradition, according to the elemental spirits of the world, and not according to Christ.”       Colossians 2:8 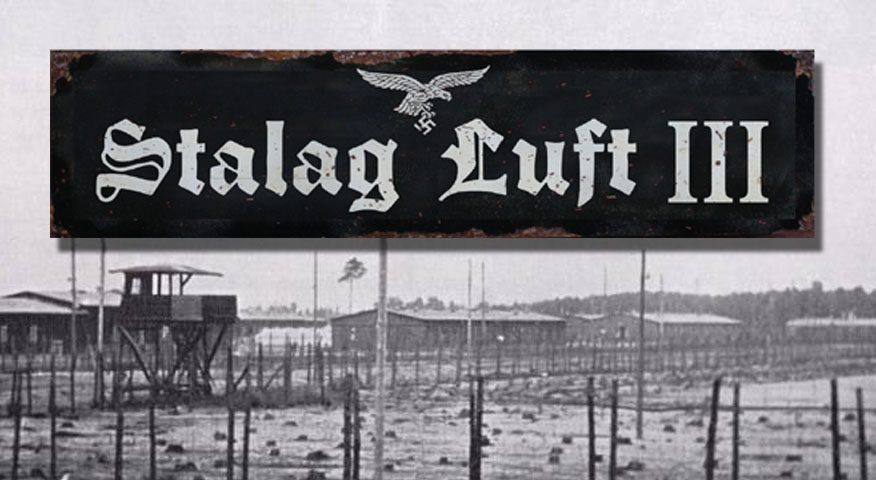 When I was young, I used to play golf at the Maxwell Air Force Base golf course a couple times a month. There are a few holes on the back nine that run past the federal prison on the base compound. Often times we would look over at the men held there. It was a strange feeling knowing freedom was determined by a simple chain link fence and little else. Something they had done in life had placed them in captivity, away from whatever they called home.

My Uncle Doug knew that feeling as well. His prison sentence wasn’t brought on by poor choices but from a noble cause; fighting for his country in World War II. He was a B-17 pilot and was shot down over France. For 18 months his forced residence was Stalag Luft III, a nasty place made famous by the movie “The Great Escape”. 75 years ago, 76 men broke out through a tunnel named “Harry” but only 3 made it all the way home. Hitler was so furious at the embarrassment it brought, he had 50 of them executed. Still, they never regretted the attempt. Those men, and the many others who sacrificed and worked so they could escape, had decided they would risk anything to return home. They desperately wanted the freedom they had fought so heroically for.

The desire to get home can be a powerful force. The longer I am away from Letia and my house, the stronger my urge to return. I will put up with a lot; bad weather, late nights, and early mornings to make sure I can get back home. It has a strong pull.

To my Uncle Doug and the other prisoners, barbed wire, guns and dogs were not a deterrent. The more the warden threatened punishment, the more determined the prisoners were to get out. Threats and punishment could not overcome hope and love. Every day, they worked on plans that could take them home. But what if the tactics were changed? What if no heat was exchanged for soft warm beds? What if limited rations were exchanged for private chefs, choice food and date night? What if the wire came down and fishing ponds and shopping trips became the norm, how determined would they have been to get home then?

Have you ever thought about what is holding you prisoner? What if you became so comfortable with what you were given, that you started to forget about where you came from? What if you forgot where home really was? Caesar figured that out in Rome a couple thousand years ago. When the people griped about rules and servitude, he gave them free admission to the coliseum and handed out free bread. Life was easy and food and entertainment were plentiful. Why would they want anything else? The best prisons have no walls or locks, and offer unlimited comfort and pleasure so nobody is ever tempted to run. Why think about an incredible God and a perfect Heaven, when life is pretty good here? Why struggle and claw to get home, when the Ritz has maids and free breakfast?

Notice how Paul cautions the believers in Colossae about how they could become captives. He isn’t concerned with chains and cells (which was exactly the condition he was in when writing the letter) as much as worldly traditions and false promises. Things that look so enticing but have no foundation at all. Things that take you away from your first Love and leave you empty and longing for more because the desire they create can never be satisfied. They promise a life where you are “free” to do anything you want, anytime you want. You will be your own god, beholding to no man.

The truth, however, is the only real freedom we all have is a freedom to choose who we want to serve; God or ourselves. If we choose ourselves, our ultimate destination will be a lonely, desolate and fear-filled place devoid of any hope. A kingdom of one. We will get what we want; ourselves and only ourselves, in a place that takes us forever away from home. This earth, in its broken state, is not our home no matter how pretty we try to make it. You were made for something far better. You were made to live forever with your Creator in a place without any of the pain and fear that can grip us here.

Look around you. Can you see the prison bars? Do you see the traps that have been laid for you? They are there. They get disguised like cars, alcohol, big houses and friends bought with gifts. Many of our prisons are self-made with disposable cells that we keep rebuilding with newer and shinier things every day. We decide to settle for comfort in place of salvation. We exchange permanent healing for temporary relief and allow things of this world to get between us and God. Aren’t you tired of searching for the next good feeling? Why don’t you shake off the chains and fight through the wire. Break out and start on your journey toward home. No one can keep you captive except you. Ignore the pain, ignore the despair, ignore whatever this world is promising you; turn toward your Father and take one more step. You are one step closer to home.