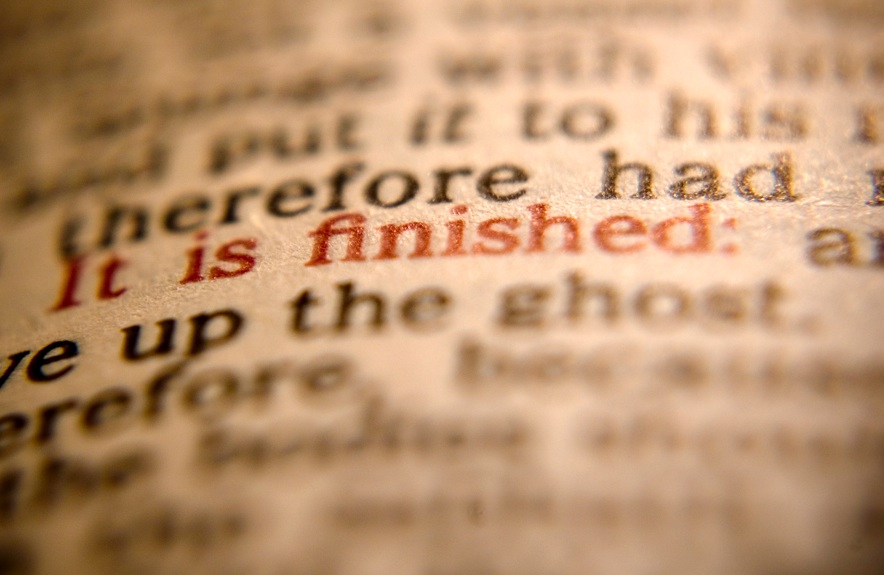 “It is finished!” And He bowed His head and gave up His spirit.

I wonder why more people don’t read the end of novels first. It seems to make sense that if we already know the outcome, it would take the tension out of the story. But then again, the tension is part of the story, isn’t it? At least in novels, not real life, we like the anticipation and intrigue that develops as we get drawn into the characters. Really good writers get us immersed into the story and we start to feel what the characters feel. Their emotion becomes our emotion.

So I asked myself the other day, why don’t I feel this way when I read the Bible, the greatest story ever told? My conclusion was, because I already know how it turns out. I have read it through to the ending, and because of that I can lose emotional contact with some of the characters. However, thanks to Matthew Kelly, author of “Rediscover Jesus”, I have looked at the gospels in a different way. He suggested a re-read of the gospels from the viewpoint of the characters. That is different from how I normally read them when I want to know how they impact me. There is certainly nothing wrong with applying the gospels to your life and striving to mold yourself to them. What I’m suggesting is, maybe there is an even deeper significance available to us?

What if you were able to read them like you didn’t know the ending of the story? What if you lived them through the life of a disciple, or a blind man, or the woman reaching for Jesus’s cloak?  What if we read them in real time like Jesus was our last hope?

So I re-read the resurrection verses like I was a disciple and tried to experience the fear and sudden hopelessness that had to grip them that Passover week. We talk about going “all in” on things, but these disciples had gone all in.  They had literally left everything behind to follow Jesus. Jobs, family, reputation – everything.  Three years walking, watching and listening. They were fully committed and had been rewarded by seeing, hearing and experiencing incredible things. Things that we still have a hard time comprehending today.  During Passover week, they knew things were changing. How would the King of Kings, the Messiah, the Son of God wrap all this up?

Then the authorities took Him. At night in the garden, they came and took Him. They had tried before (see John 7:30, 44; John 8:59; John 10:31, 39; Luke 4:29-30), but He was able to say or do something to diffuse the situation. Confrontation was not new, but up to now He had always been able to get away. Why wouldn’t he do something? Then to witness the trial, the questioning from Pilate, the beatings. Why wouldn’t Jesus defend Himself?  He is the Messiah. They were convinced of this.  This can’t be happening. When is He going to set it all right?  When is He going to end all of this?

And then came the crucifixion. The unbelievable became believable. He looked down at John and Mary and the few who were still there, still somehow holding out hope. No words of encouragement. No great game ending motivational speech. One last phrase, “It is finished!” Finished? What do you mean, it’s finished! This is it? Where is the victory? You mean Rome wins again? They have taken everything from us. It couldn’t be finished, but it was. Everything these disciples had poured their lives into was dead. Their hope had died on that cross along with Jesus.

We’d like to believe it’s different, but I don’t think so. We know the rest of the story and assume that they fully understood all Jesus had tried to explain to them. As I re-read this from their perspective at the time, all I could feel was a crushing hopelessness. A hopelessness I have felt when anything dear to me was suddenly taken away. I’m sure you’ve felt it too, and with everything going on in the world, maybe feeling it now. The cause might vary, but the feeling is the same. It could be your job, wealth, or health; a spouse or child, or simply your dignity and self-worth. The sense of loss and hopelessness is just as real, all the same.

So hopelessness and fear locks you away from the world, like it locked the disciples away from the world. Not just because you fear for your safety, but you also fear a lack of direction. Jesus not only gave you purpose, He gave you direction. Now you have neither. So you pull inside yourself and wait, but you don’t know what you’re waiting for. Then, when all the questions and what if’s fade, He shows up. Right there in the middle of the room. Once again the unbelievable, becomes believable.

A story of hope only works if you can relate to a real sense of hopelessness. The good news is Jesus understands it and welcomes our doubt. His closest friends had it, and He brought them through it. Immerse yourself fully into the disciples’ hopelessness, and the passion and confidence of proclaiming the resurrection found in the book of Acts becomes even more powerful.  This change from fear and lostness, to an unwavering boldness to share about Christ could only have come from a risen Savior. They couldn’t hide their fear, and they certainly wouldn’t hide their redemption.

You may think your hopelessness is beyond healing. You may have convinced yourself that nothing this world has to offer can get you out of your deep, dark hole. That this world has taken everything from you. On two accounts, you would be right – this world will take from you and this world has no interest in helping you. But I would simply say to you, look at these disciples from a new perspective. Let their hopelessness be your own. Then look at the One who pulled them out. The One, Jesus, who has overcome the world. The resurrection story is not 2,000 years old, it is fresh and new and powerful, and recorded for you. It is the story of a mighty redemption. It is your story.