“There’s a young boy here with five barley loaves and two fish. But what good is that with this huge crowd?” 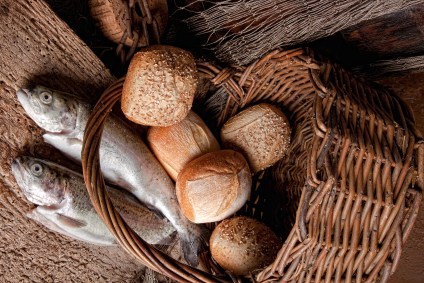 What a day that was. After doing my work at the house all morning, all I wanted to do was get to school. It wasn’t really that far, and I always enjoyed the walk; just a little extra time to myself. I remember I would often spend time thinking about what it would be like when I grew up. Would life be as plain as every day seemed to be, or would I be a difference maker? Those were always distant dreams because nobody in my family, including me, had any gift that destined us for greatness. That’s what I thought until that day.

That day was different. As I came over the ridge the normally empty hillside was full of people. It was in the middle of the day, but people were everywhere. It seems some guy had been talking and all these people, thousands of people, wanted to hear what he was saying and took up every spot available. The only difference between them and me was I was planning to be gone and had brought my lunch. They apparently hadn’t thought that far ahead. That many hungry people can be a nasty deal, so I decided to make my way around them and move on. On this day though, my plans changed. I changed.

Apparently the issue of food had been discussed before I got there. One of the guys with Him said something about my lunch, and He – the guy who was speaking – came over to me. He said, “I know I’m asking a lot, but would you share your food with me and these people?” I’m thinking, “Right, I’ve barely got enough for me and you want me to give it away?” He could tell I was a little skeptical, but He said to me, “it may not seem like much of a contribution, but you have exactly what I need at this moment.” So I agreed and handed Him my sack. I started to go on to school, figuring I could share a little from one of my friends, but He called me and told me to wait. After about 40 minutes, He handed me back a basket with enough food to feed me and my family for a week! He looked me straight in the eyes and said, “When you’re willing to give all you have, to make the most out of the gifts you possess –no matter how small– you open yourself up to witness amazing things. You become capable of being part of great things. Things that will last forever.” I never thought something as small as sharing my lunch could lead to something so big.

Most of us go through life believing we don’t have much to offer. Thinking, “How could I ever make a difference?” It’s so easy to believe in the enormous world around us that our individual impact is meaningless. But the kingdom belongs to those with the lesser gifts. Gifts that never make the news or receive a Grammy or an ESPY. Gifts, that when given, drain the glass and leave the giver at risk of being left empty. Empty and vulnerable because they have given all they have for the sake of another. But it is only when we become empty, dying to ourselves, that we are capable of being filled. Filled to overflowing with the love and compassion of The One who gave all of Himself so we can be renewed. Made new and filled with the satisfaction that our unique gifts are truly needed, and will make an eternal difference.  And because we gave them willingly and fully, our fingerprints will be embedded in His kingdom forever.